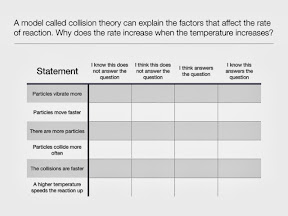 I have been inspired by the York Science project (www.yorkscience.org.uk ) to use diagnostic questions with my students. York Science have already produced lots of examples for key stage 3, but after a suggestion about using examiners reports on their blogs I decided to change my attention to GCSE classes. http://yorkscience.org.uk/making-best-use-of-exam-questions/

I made some over the summer as examples for the department, but yesterday and today was the first time that I tried them with a GCSE class. I gave the question in the image above to both my year 11 chemistry classes. It was a review of the last section where they learned about using temperature to change the rate of reaction.

I was really pleased with the results. From my point of view I could see who had misconceptions and might write the wrong thing in an exam: those who did not understand English enough to realise why an answer is wrong. For example the answer 'the collisions are faster gave a lot of debate in the class as to why this did not mean the same thing as 'the collisions are more frequent'.

I asked the students afterwards, a few did not like the activity. They did not want to get the question wrong in the first place and found it hard to understand. A few didn't mind the activity. And some were pleased as they liked that you could see the sort of statements that wouldn't give you marks and therefore know how to avoid them.

I think that this is a great activity to use with a class, and will aim to use them more often.

Thanks a lot to Mary Whitehouse and the York Science Team.

- Posted using BlogPress from my iPad

Helen Rogerson
Since 2003 I have been a science teacher. I have always loved science and how it helps us understand the world around us, as a result I went on to study Mathematical Physics at University. I decided to become a teacher because of the way that I was taught: I want my students to discover their ideas about science. I try to put constructivist methods at the heart of my teaching. I think that it is important that every child leave school able to understand the science within the world and make sound decisions on how they live their life based on that.